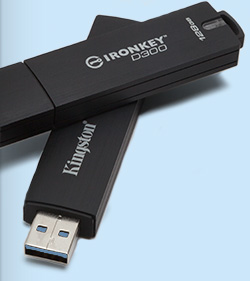 The D300 is known for it’s high standard of security, speed and performance. It utilises FIPS 140-2 Level 3 and 256-bit AES hardware-based encryption in XTS mode.

It is also immune to BadUSB because it uses digitally signed firmware.

In addition to this, it also makes sure that only strong passwords can be used in order to prevent unauthorised access.

The IronKey D300 was also recognised and won the Platinum “ASTORS” Award for Best Data Storage Security Solution in 2017.

Thanks for visiting our site!

We are not currently accepting new customers via our online store. For existing customers and orders, please contact us directly through the usual channels.